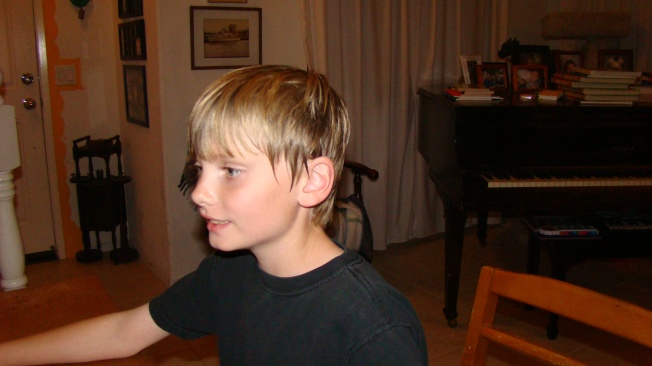 The little boy came out of his room three times last night.  Husband dealt with the first request, but he was out of earshot for the next two.

After the afternoon we had, I was pretty much emotionally incapable of interacting with my kid, so I started up the stairs in a fury both times.

He wanted a cup of water.  Why he couldn’t pick up the cup on his bathroom counter, turn on the faucet and get it himself, I don’t know.  I suspect that it was just a means to a desired end.  The end being Mama upstairs.

I was annoyed with him and I’m ashamed to admit how little patience I had for his post bedtime shenanigans.  I was snapping at him.  As an outsider looking in, I might have thought my mood unrecoverable.  I might have claimed an ogre sighting.  😡

But there was this turning point, you know?  Just like there always is.  You moms know what I’m talking about.

I was so mad at him, so tired, so stressed out, so desperate for a break, and then suddenly, I looked at him and he seemed so very little.  And sweet.  And vulnerable.  And just as tired and stressed out and desperate as I was.

All he wanted was for me to lie on the bed with him and whisper how much I love him and how good he is and how lucky I feel to be his mommy.  And I do.

He wanted me to rub his little head, brush his too-long hair out of his face, and squeeze his little hands.

As I turned in the hallway to close his door, he asked me to blow him a kiss.  It’s part of our routine and I had almost forgotten it.

I guess I get to say the night ended well, but as usual, I am in a fog the day after.

Can’t even think what else to write about.

It’s almost time to pick him up from school.

If he wants some kind of cup today, I’m just going to get it for him.

No struggle to modify behavior.

None of that today.

P.S.  He just walked to the pantry and selected a cup without hesitation.  I have no idea why he was not able to do this yesterday.  I am exhausted from pondering it.