My jeans are too short.

I hate this pair, but the other three are in the laundry pile.

It doesn’t take much to deduce that the giant shoes contain giant feet.

And I have a love-hate relationship with my shirt.

I like the print.  I like the top half and how it fits.  It also has a good sleeve length, but over all, it’s too short.  Just like the pants.

I feel like an Oompa Loompa.  Because my face is flushed too and that’s sort of like being orange, right?

And I do love chocolate and Gene Wilder.

But not Johhny Depp.  He stresses me out.  I don’t like noticing how hard someone tries to be someone else.  😳  It’s uncomfortable to watch.

I took the little boy for a haircut this afternoon.

I had to call ahead and delicately ask if we could avoid the stylist we had last time.  She botched him up good that day.  I couldn’t let her near him again, but I needed to go to that salon.

It’s the only place close to home that has video games and movies and things to distract him.  He’s used to it and would likely have trouble with someplace new.

That’s why I delicately asked.  The manager completely understood and we had an appointment with her instead.  She was fast and careful.  The boy looks great.

We went to Burger King afterward.  I have grown to really hate fast food restaurants.  Before I stopped eating meat, I went to them all the time and truly, I never considered the consequences.

Now, I can’t think of anything else when I’m in them.  The food does nothing for me nutritionally (except fortify my inner Oompa Loompa) and I am ashamed of the pile of trash we accumulate from just one meal.  Look at this Carl’s Jr. mess from earlier in the week: 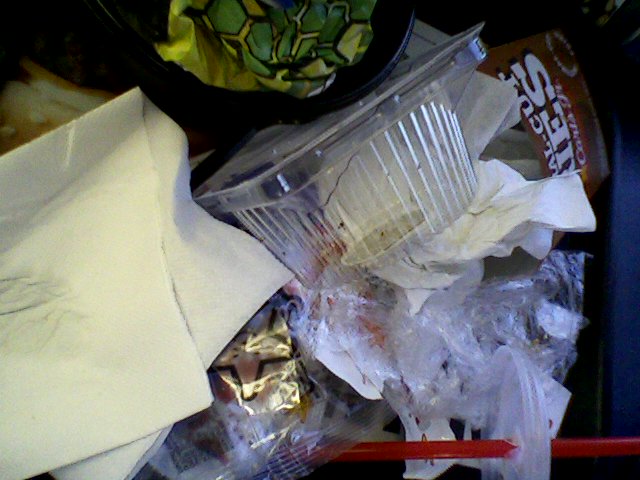 At least Burger King has veggie burgers and decent iced tea.  McDonald’s has neither.  McD’s iced tea tastes like old shoes.  Really old shoes.  That belonged to a sewer worker.

Seriously though, the thing that bothered me the most today was the cashier’s fancy manicure.  Since when is it okay for a food service employee to have long, painted fingernails at work?   This girl also had three little rhinestones glued to the tip of each nail.

That in itself was disturbing to me, but nothing prepared me for the gagging reflex I had when I noticed that one of the rhinestones was missing.  All I could think about was whether or not I would find it in my food.  Disgusting.  It used to be that trim, neat and clean was the only way to go for food handlers.  But I guess it’s kind of a stretch to call that stuff food, isn’t it?

On the way home, we stopped by a vacationing friend’s house to feed the kitties, then we hit the Nestle store for a couple of cookies, and called it a day.

Now the little boy is playing on the computer (in his new haircut) and I am dreaming of my warm pajamas.  It’s really cold outside tonight.  Well, cold for San Diego anyway.  How is it where you are?

P.S.  I know I’ve mentioned my book three times already, but I have to tell you again that it’s really good.  I was so engrossed in one of the steamier paragraphs this afternoon, that I didn’t even realize the stylist was trying to get my attention for a review of the little boy’s lighter locks.  So embarrassing.  😀  It has been a while since I’ve been this captivated by a regular novel.  You know, regular, as in not written by Dr. Seuss or Sandra Boynton or Martha Stewart.  Just regular.  🙂