The little boy is enamored of arms.  For months now, he has been fascinated with freckles and veins and moles and anything that sets an arm apart from the one next to it.  He likes to study these things.

Mostly, it’s kind of charming.  He is gentle and sweet and genuinely interested in the differences between us and himself.

Sometimes though, it’s sort of annoying.  My arms are not my best feature, you know?  I don’t really want him to point them out in public, much less unexpectedly reach his hand up my sleeve and shake them.  😐

To combat this unwanted activity, I started pulling him close and threatening “if you jiggle me, then I tickle you!”  It stopped him about three times.

Now he has, in fact, used the word “jiggle” to nickname my arm.  And his dad’s arm too. (Though dad’s doesn’t actually jiggle.)

A few weeks ago he came up to me, his eyes full of love for my fleshy underarm, and he said “Thomas hug the jig?”

Seriously?  I don’t even get the rest of the word, now?

My husband and I both laughed, but I don’t know.  It just sounds wrong or something, doesn’t it?

Well, whatever, that’s what he says now.  My arm is “the jig.”  More specifically, the squishy, unfit, underside of my upper arm is called “the jig.”

the boy has eyes for other arms too.

He just likes to hug people, you know?  He sees their bare skin and he smiles.  He is fascinated and wants to wrap himself around them and just hug.

Most of the teachers and aides who know him at school are fine with his latest obsession.  None of them seem to mind this extra attention from my smiling boy.

Every morning as we stand in the line for his classroom, my son eyeballs the arriving parents.

It’s hot in August and all those mamas have on tank tops and spaghetti straps and short sleeves.

My son is fascinated.  He smiles, he laughs, he looks, he really wants to hug.

Today, one of the moms I’ve never met (and whom I’m a little put off by, actually 😐 ) showed up in a strapless sundress.  Oy.  She sat at the picnic tables with the kids who were eating breakfast.

Nothing happened, but only because I never took my eyes off of my son.

He skipped up to the tables, deftly weaved between the other kids and was standing next to strapless mama in about two seconds flat.

Her back was to him, so she never knew that she almost got an arm squeeze.

I called him back before he did it and tried to explain that he couldn’t hug just any jiggling arm.

I don’t know if my words made sense to him or not.  I’m guessing not, since I’ve told him this same information every day for several weeks and nothing has changed.

We get to school, we stand in line, and the boy starts jonesin’ for some jig.

Next month, he’ll have a new obsession.

As I typed this, he wouldn’t leave my arm alone.  Just now he asked me “Thomas hug the jiggy?”

I got some letters back.  😀

P.S.  Those pix above are from our weekly IHOP visit.

P. P.S. Husband is making little changes in the yard this week.  I’ll post a few pix in the next day or two.  For now, look what I brought in to put on the counter.  I love, love, love the bright orange. 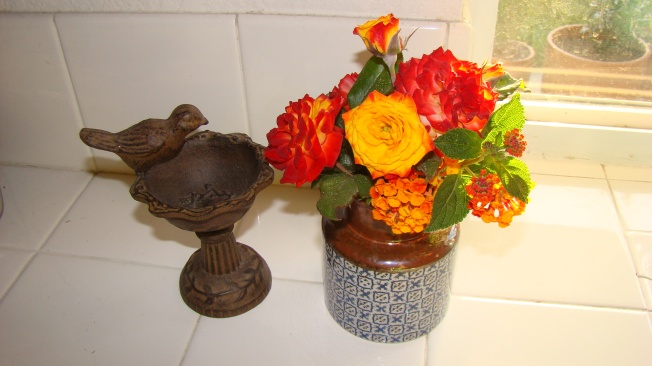