I got a letter in the mail last week.

Truth be told, I invested a few notes of my own to get this amazing return.

What can I say?  I have a thing for pretty stationery.  And stickers too.  I can’t just stockpile it all forever, so I sent cards to six or seven people on my address list a few weeks ago.

It came from a 90-year-old friend of the family.  She lives in town, but I never see her, so it was lovely to read something she had written just for me.

I highly recommend that you send out some notes.  These days, snail mail is a luxurious treat and it’s still relatively cheap to send.  You might even get something spectacular in return!

The boy had the big sedated dental appointment last week.

I think we did a good job talking to him about it.  We explained it well in advance, I put it on the calendar, and we brought it up everyday for almost a month.

He knew what would happen and he even seemed proud of himself for having the information to talk about.  “We’re going to the sleep dentist!”

He was quite a little trooper too.  We explained the food restrictions and he never even asked for his morning chocolate milk or snack.

He dressed and rode in the car without complaint and he waited patiently through every part of the process at the hospital.

He wore the gown, he held out his arm for blood pressure, he got on the scale and he used the bathroom when we told him to.

He was a model of compliance…

right up until the moment he was on the table in the O.R.  😦

I was right there with him and I really do think that helped.  I kept my cool and I saw his body briefly relax when our eyes locked, but it was a losing battle.

The nurses, the anesthesiologist, the other techs – five people in all – surrounded him and tried to do things quickly.

I get it.  There are a zillion kids out there, only a limited number of surgical teams, rooms, etc.  There is no space or time for letting my autistic son catch up and comply.  They had to assume he never would, so they just dove in and grabbed him.

As you can imagine, he freaked the hell right out.  I stayed calm and talked softly, but it was tough to watch.

It took all of them to hold him down.  Well, all except the one wise nurse who heeded my warning about too many people in his face.  I figured she was the only parent in the room.  Before I even finished my comment, she took a step back.  I love her.

The others forged ahead and managed to get the mask over his face.  He collapsed back onto the table pretty fast, but his eyelids were purplish and fluttering, so I knew he wasn’t done struggling.  It made me sad to see that.  I kissed him and told him what a good job he did.

They put a tube up his nose after I left.  The gas through that would knock him out harder.

One of the nurses took me back down the hall.  As we walked, he said “you know, your son is only going to get stronger.  Next time, maybe you can ask the doctor for some medication to make him drowsy in pre-op, so that the mask isn’t as traumatic.”

Why the hell no one suggested that this time, I don’t know.  It kind of pissed me off.  😡

I made it back to my husband and ripped off my tight paper goofy suit.  I made Husband promise to erase the memory of that vision from his head.  Those suits aren’t really meant for rubenesque women.  😳

Husband followed me out of the building.  I led him thirty yards from the door and behind a big pillar near the parking garage before I started crying.

There wasn’t really anything to say.  I was sad that only one of us was allowed to go in and I was tortured by the fear I had seen in our son’s little face.  Husband understood and hugged me.  Then we ate bad food and waited.

The boy woke up hard and was mad about having to stay so long in the post-op bed, but he was basically okay.

He came through everything emotionally and physically drained, but he was eager to go back to school the next day, so we knew he would be fine.

The net result of the whole experience was positive.  We learned some things for next time and the boy’s teeth are in pretty good shape.

And the most important thing?  During the struggle in the O.R., he said “all done” over and over again. That may not seem significant, but it’s really quite huge.

He doesn’t communicate well under duress.  He loses his words and sometimes violently tantrums or becomes eerily still and stuck when he’s upset or frightened or hurt.

This was a worst case scenario for him – a cold scary room with weird lights, odd noises, and a bunch of strangers grabbing at him – and he perfectly articulated how he was feeling.  “All done!”

I don’t think I realized until I dropped him at school the next morning just how much dread and anxiety coursed through my body in the days before the appointment.

Looking back on the last few weeks, I am reminded that heightened stress often keeps me from writing.

I am so glad we don’t have to do this again anytime soon.

I stowed a few pumpkins in the china hutch this week.

Then I came to the conclusion that I need to get the hutch out of this room.  😦

It’s just too huge for this choppy, awkward space.  I love it, but it limits what else we can do. 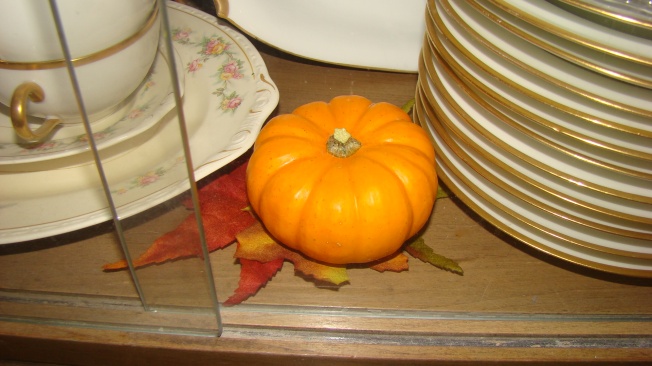 Stay tuned for the next round of what-the-hell-am-I-doing-with-my-house?